The Machine
By Anthony Jutz

The rusting, ancient hulk,
It hungers for our bones and gore.

Caked with bile,
Its gears grind our rotting flesh.

The Machine,
Older than any of us can remember.

It powers our rotting city,
Huffing mold and mildew through its vents.

We feed it our dead and dying,
Yet it still hungers and groans.

Its crusted parts screech in agony,
Yearning for more than we can give.

We call out the barred windows of our city,
That not even our hottest torches can melt through.

This ancient, rusted god,
Providing power to our home and prison.

One day I will feed it, too,
My gangrenous corpse fueling it for one final hour.

In hopes, we grind,
Perchance, to find:

Hey friends! It’s been a while since I’ve checked or updated this blog. Most of my goings-on are on my Patreon lately. But, I’ve been pretty busy and I’ll get into a bit of what I’ve been up to here. There’s nothing quite like having a personal website to call home.

First of all: I made and released my first ever album, called The Machine Awakens! I participated in National Solo Album Month (NaSoAlMo) in November and found that a deadline (plus better mental health) actually does help a fair bit. It’s about putting something out in the world, not aiming for perfection. Perfectionism just seems like another form of vague idealism that doesn’t give me a real goal. So, better to just hammer something out!

Here’s a link to the album on Bandcamp! I’m proud of how it came out. My last couple years of practicing and poking around have paid off. I’m planning on releasing a bunch of loose songs I have from the past couple years at some point, too.

Here’s a link to the album on Soundcloud too, in case you’d rather listen there since there’s no play limit.

On the art front, I’ve been keeping it pretty low-key. I’ve had some (routine and not-scary) medical stuff going on that’s taken a lot of focus. It seems to be getting better now though, so we’ll see how things go from here.

I did do a bunch of tiny paintings and such though!

[Image Descriptions: Top left is a rocky desert scene with flowering plants. Top middle is a butte with a cloudy skyscape. Top right is three buttes with a clear skyscape that contains a bright sun. Bottom left is more cloudy desert. Bottom middle is a foreground of rocks and trees with a giant sun behind it. Bottom right is four brush pen trees ketches of both leafy and bare trees with rocks at their base.]

Through October and November, I did some Inktense and colored pencil sketch, some brush pen stuff from imagination… mostly just tiny experiments that the sketch card tier patrons I have might like.

This month, December, I plan on doing more brush pen experiments. I want to work up to doing a larger illustration or two in prep for a commission I have. It’s kinda nice just poking away at things and having the goal of finishing something to keep me on task.

Anyway, that’s it for this time. I hope y’all have a wonderful holiday season and rest of the year!

Hey friends! It’s been *several* months since my latest update here. I’ve been doing a bunch of sketching and music, but most of that’s ended up over on Patreon (behind a 3-day delay between sharing and being public).

As you can see, I’ve been developing much more confidence and competence in my line work and painting now that I’ve gotten back into watercolors! I’ve found my happiness in it, at long last.

Anyway, that’s all for now! I’ll try to be better about updating this page more frequently in the future. 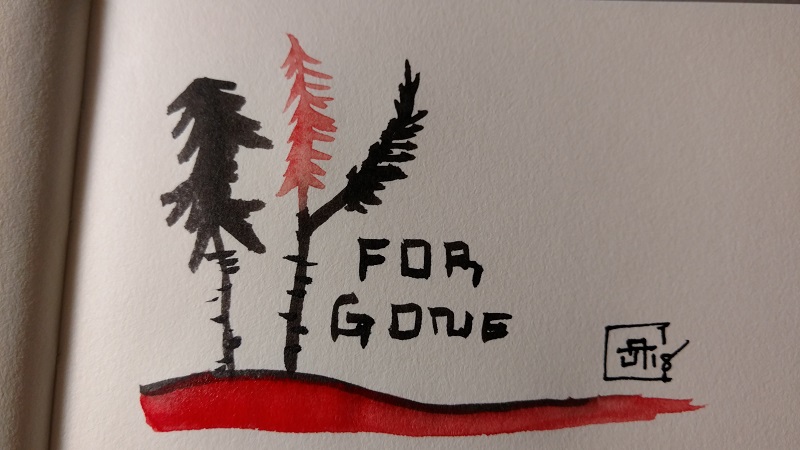 END_OF_DOCUMENT_TOKEN_TO_BE_REPLACED

I just realized it’s been about two months since I’ve updated my blog. I haven’t forgotten it, there just hasn’t really been all that much to share due to illness and tech issues.

I am working on a short comic project though, so whenever that’s done it’ll be posted here.

So, it’s been an eventful few days, after a rough patch last week (which I posted about for my Patreon subscribers). I’m doing better now, however, and am making changes to my life to hopefully prevent or lessen the impact of such an episode in the future.

Such changes include my giving up alcohol for good. It’s been doing me no favors and I’ve wasted too much money on it. There’s little point in consuming something so unhealthy, anyway. I’d rather drink tea instead, so I will.

I’ve also been changing my inner self-talk. I used to use very demeaning language when talking to myself, particularly when I’ve made an error or remembered a past one. Instead, I’m just shrugging things off and taking them as a note to do better in the future. Live and learn, eh?

On top of all that, I’ve picked up my copy of Steal Like An Artist by Austin Kleon (who you should really give a follow on Twitter) again. This book is full of amazing creative advice for artists. There’s no shame in “stealing” things and making them your own. Now, neither I nor the book mean in the sense of plagiarism. It’s all about taking some cool shit and mashing them together into something new, interesting, and our own.

Other than that, I’ve been laying more groundwork for my fifth rewrite of Recompense, a story I’ve had in the works for like four years now. I’m hoping to make the best out of it I can this time, and know I will. This story deserves it. I deserve it, too, for all the effort I’ve been putting in. Heck yeah, getting better at a skill.

I haven’t done any noteworthy art this past week, but I’ll get back on the horse sooner or later. Getting some space from such things lets me come back with more fondness and eagerness than before.

Anyway, I hope you all are well and will catch you later!