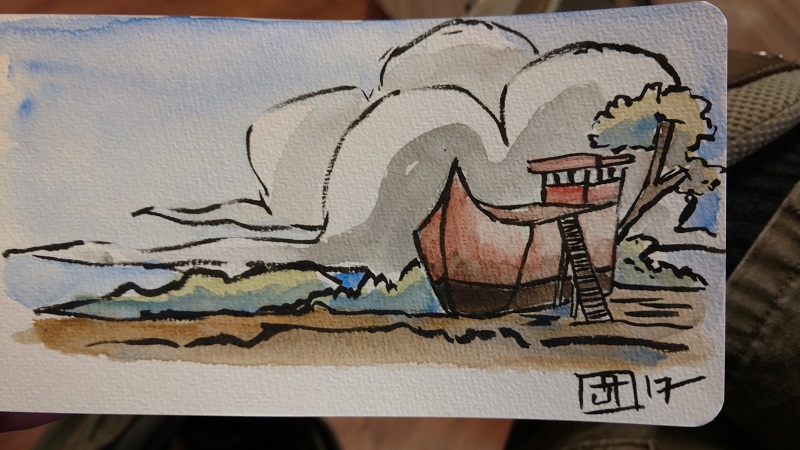 Happy New Year, everyone! Here’s an extra-long post summing up my creative journey through last year! I hope you enjoy. 🙂 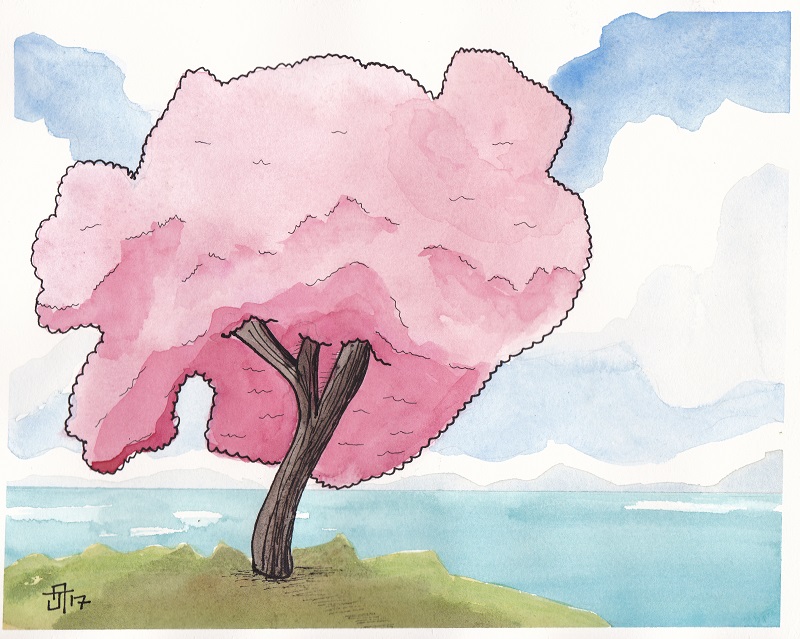 Here’s a commission I did for a friend earlier in the year. This was back when I was still vastly lacking in confidence with everything but trees. 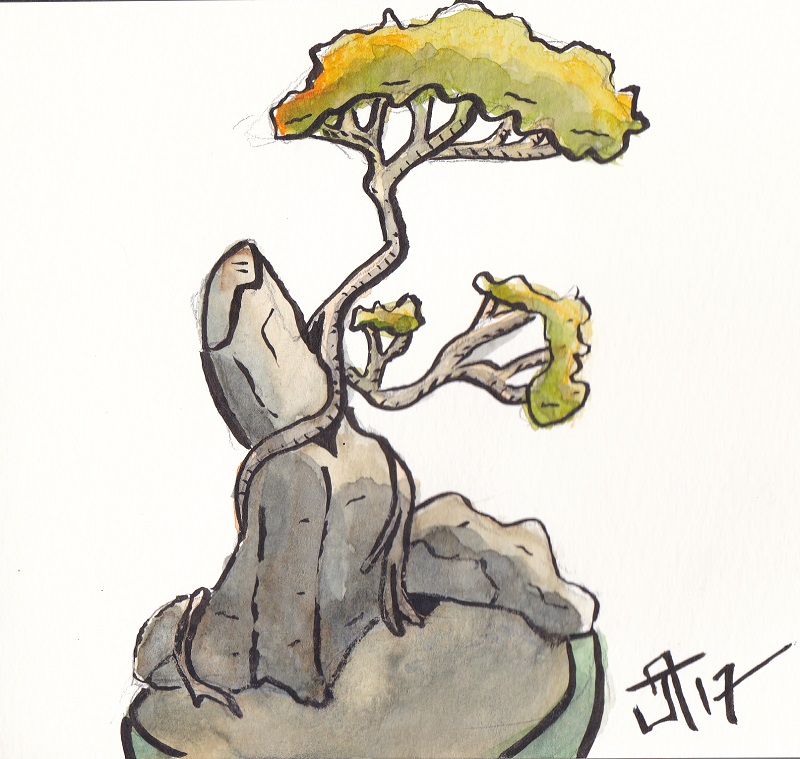 This tree sketch is one of my initial forays into giving more depth into shapes, and in doing more complicated scenes than just a tree in a pot, or a tree in a vague landscape.

My tree phase lasted pretty well through the summer, especially so during the period when I attempted streaming. I did do some sea creatures like the above nautilus as prep for another commission for a friend, in which I did several sea creature sketches. 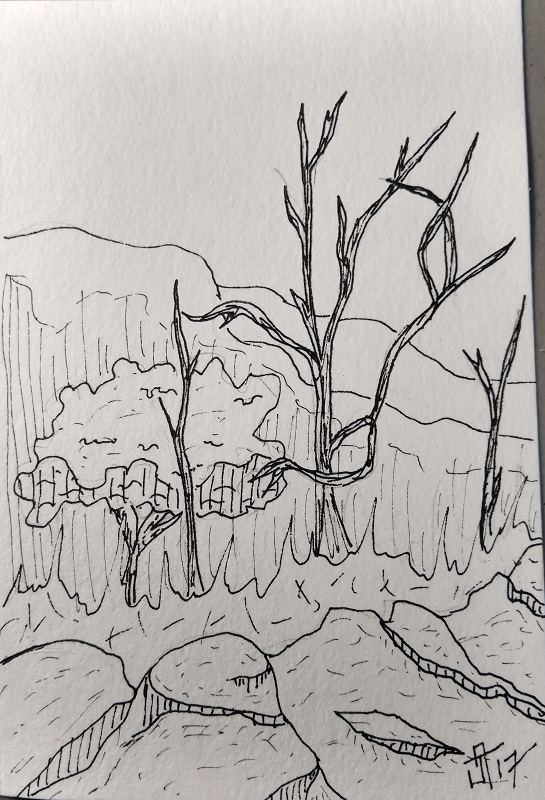 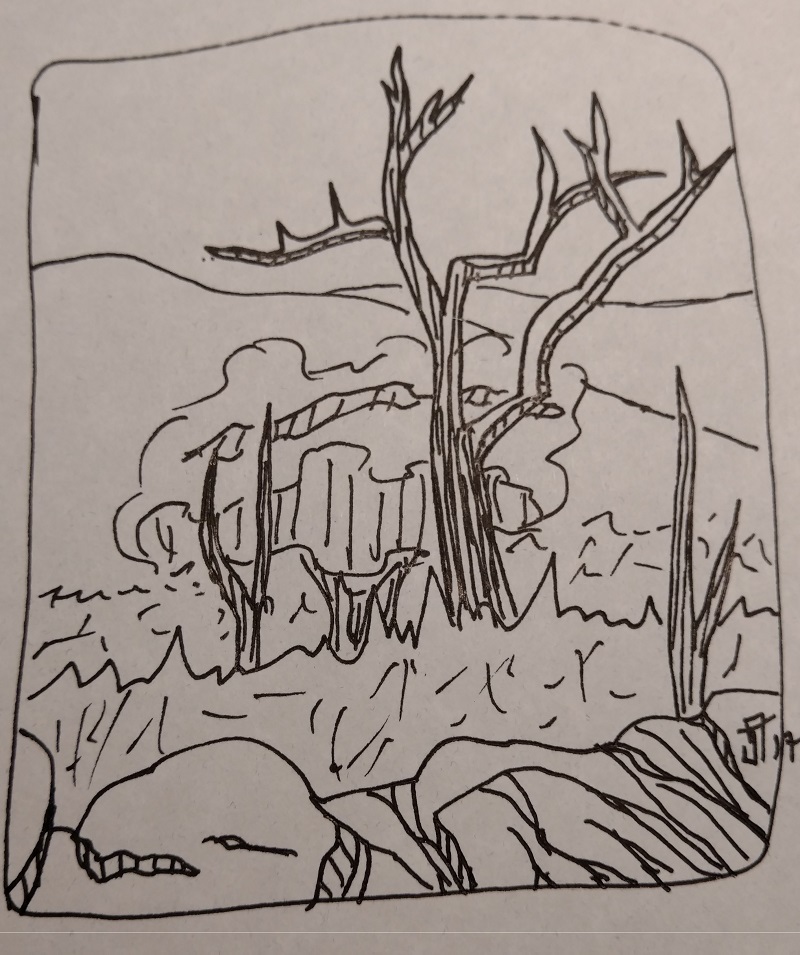 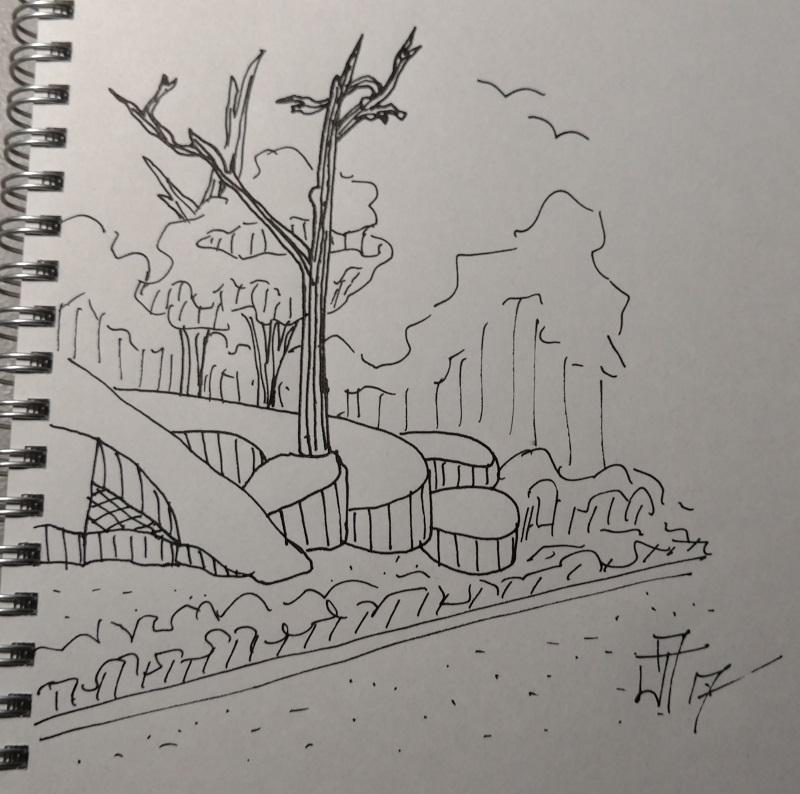 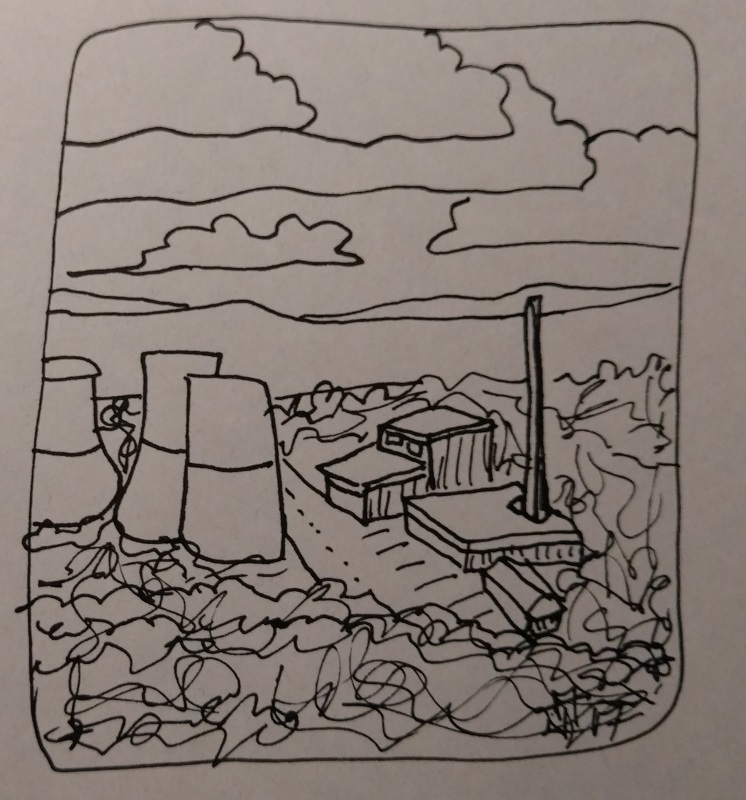 Summer was a time where I forayed further into understanding depth and perspective, as well as texture and form, to some extent. I still hadn’t reached that “aha” moment where things started to click, but I kept going. 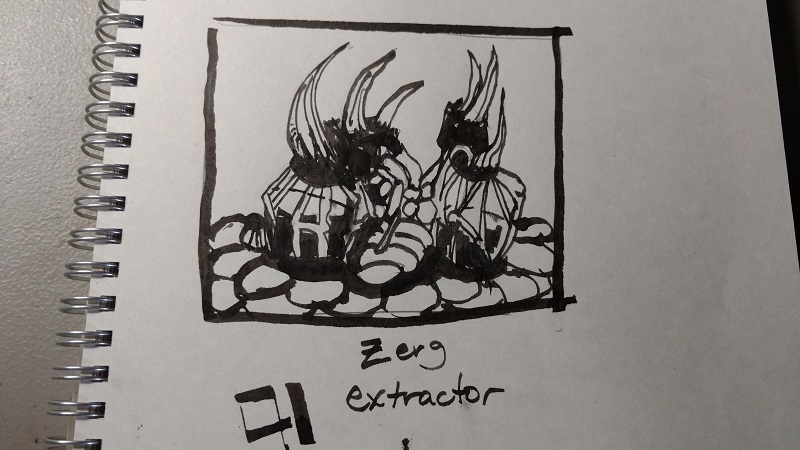 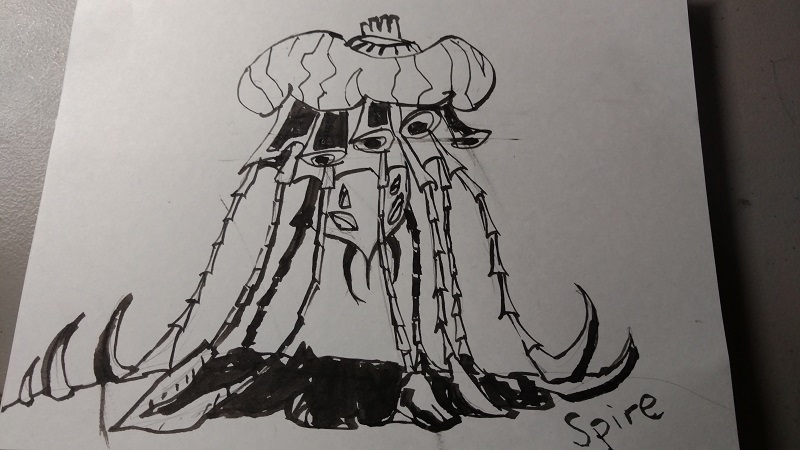 Not too much later, I started doing more deliberate studies from games and art books. The above, rather loose studies of Zerg structures from StarCraft are an example. I wasn’t too concerned with accuracy so much as learning some basic design language and practicing proportion. 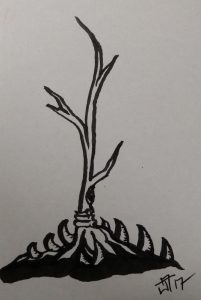 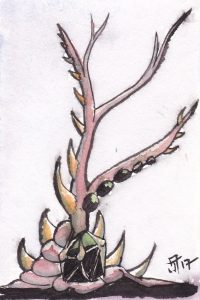 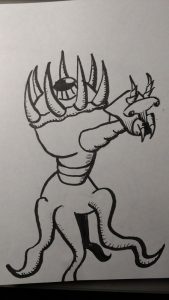 Once I felt I grokked the basic idea behind the Zerg, I did a couple monster trees inspired by my old Hell Trees. I did this weird monster design loosely based off someone’s robot, as an exercise in invention, too. 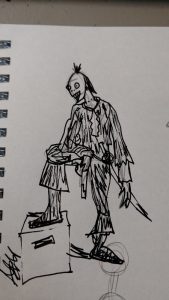 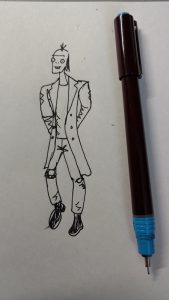 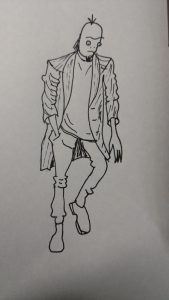 Following those, I opted to try out character design again. Here are my attempts at redesigning an old OC of mine: Gorbold Trashman. Clothing folds are pretty fun to draw, once you get the general idea down. 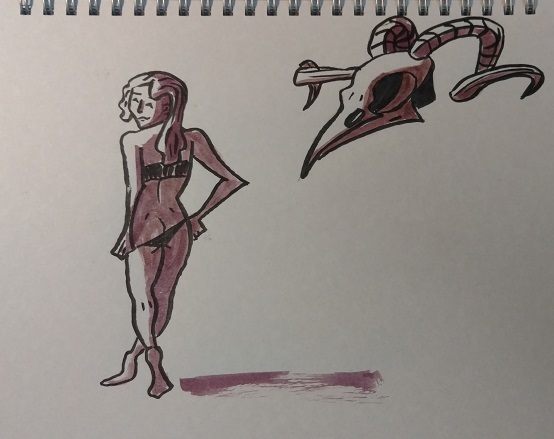 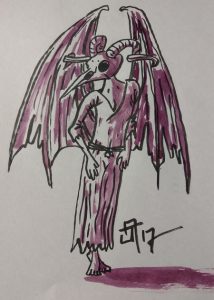 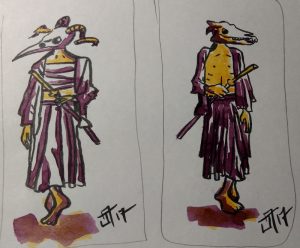 Once October rolled around, I got further into figuring out character design — especially designing characters from several references. The top picture is a pair of studies I did to reacquaint myself with inking with a brush.

The fallen angel (bottom-left) was my first boost in confidence, having reached a base level of confidence and competence in designing and drawing characters. The two skull-head warriors (bottom-right) were a fun exercise, as well. 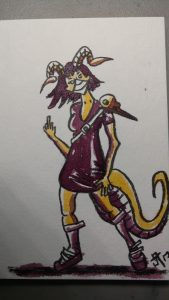 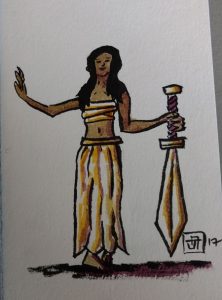 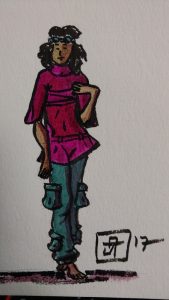 The above three characters I had fun designing as well. I had bought a set of bottled inks to try, and learned quite a bit about shading and layering with them. 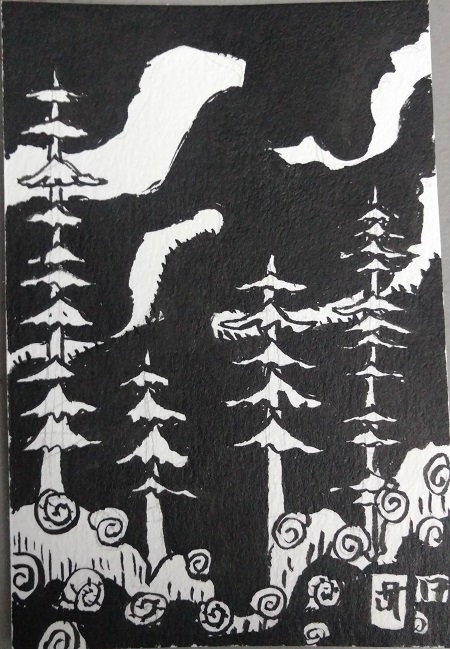 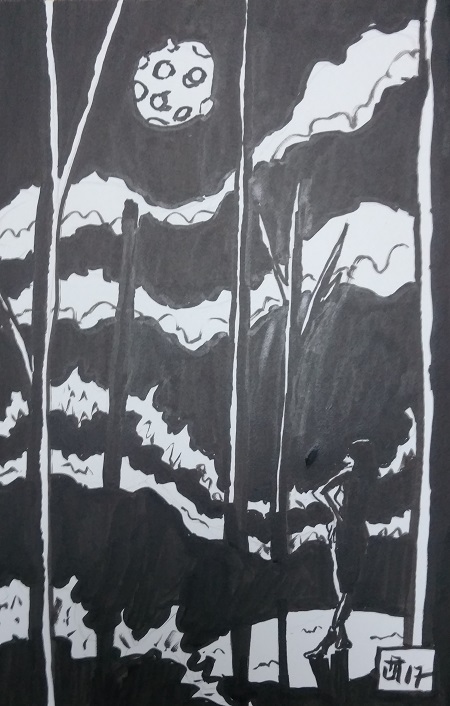 The above are a couple experiments in bold contrast and negative space. Using the bare minimum and most extreme of tones is a great way to develop better shape language and shading. 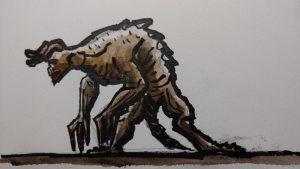 December was a month full of growth — both as a person and an artist. I did all the above Fallout 3 art book studies while in a day treatment program, after having a mental health crisis. (Things are fortunately much better now!)

Art just started *clicking* at this point, and I started having a lot more fun figuring out how other artists put things together, while simplifying them into my own style. I started having fun with things that would frustrate me in the past, like shading and texturing metal as in the above sketches. 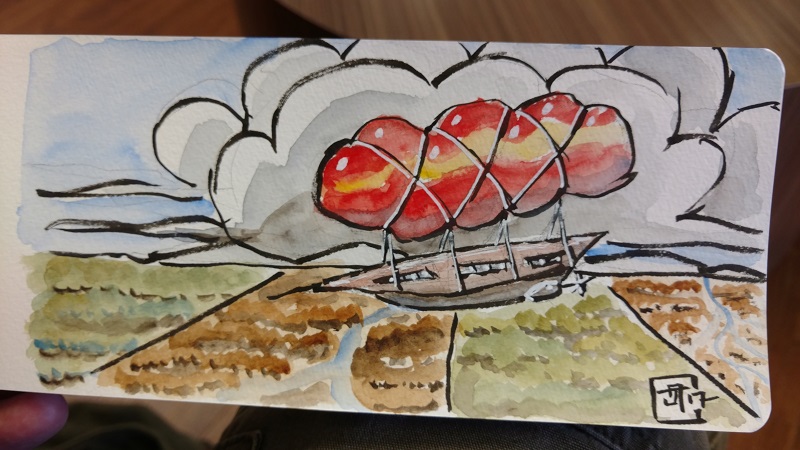 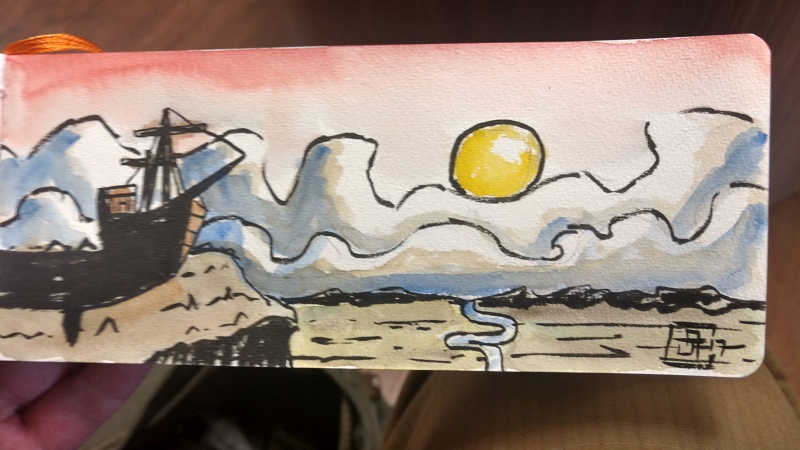 After my first week of day treatment, I got bored of doing Fallout studies and instead opted to start inventing things from imagination, to practice what I learned. These are from a world I’m creating to hopefully write stories in, about a place where the world was once mostly ocean but then Dried Up (working title).

This world came about after a buddy of mine (you know who you are 🙂 ) mentioned how my one Fallout 3 study looked like a ramshackle house on stilts that once had water flowing under it. We elaborated on the world from there, and maybe something will become of it!

In summation, I feel I made a lot of growth last year! Not only did I push myself to get much better, but I developed a cool style along the way. I feel much more confident and capable now.

I hope you enjoyed going on this retrospective journey with me! Remember: Art isn’t an innate talent; if you’re diligent and dedicated, and fortunate to have the privilege to be able to act upon that diligence and dedication, you can achieve your goals as well!

If you would like to connect and chat with me, feel free to follow me at the below links! Or if you’d like to support my endeavors financially, I’ll throw some links down there for that too! Thank you so much, everyone. <3